Start a Wiki
Flatwoods Monster, also referred to as Flatty, is a character in HorrorVale. She is a member of Mothman's party, the Cryptid Crew, and serves as an antithesis to Alice. She was officially announced on December 7th, 2019.

Named after the Cryptid known as the Flatwoods Monster.

Flatty is a dark-skinned creature with thin arms and a thin body. Her headpiece consists of a red leaf shaped helmet with a transparent glass dome attached to the front. Attached to the front of her dome is a respirator with two tubes that travel under her arms towards her back. She wears massive red pauldrons. She wears a dark red/violet skirt with several darker spots dotted around the upper half of the skirt. Her hands consist of two large digits that glow violet. The bottom of her skirt features three glowing spots reminiscent of lights that may be seen from some UFO’s. Flatty has four eyes, the upper set being noticeably smaller that glow violet.

In combat, Flatty utilizes a small wand like weapon referred to as the "Radio Wrench".

The Flatwoods Monster design by Hamberry that was purchased and then merged with to create Flatty’s current design. 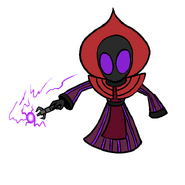 Official artwork of Flatwoods without her Radio Wrench.
Add a photo to this gallery
Retrieved from "https://horrorvale.fandom.com/wiki/Flatwoods_Monster?oldid=1937"
Community content is available under CC-BY-SA unless otherwise noted.