Jiang is a jiangshi and a merchant who sells the player items in exchange for candy found throughout the world and earned from battles. She can be found in a tent in the HorrorVale Central Square to the top left, and later can be found in HorrorVale Heights.

Jiang is named after a jiangshi, an undead corpse referred to as a hopping vampire that appears in Chinese mythology.

Jiang is a chronologically 243 year old jiangshi who appears 25 physically.

Nothing is currently known about Jiang's history in the current build of the game.

Jiang sports a typical jiangshi's design, composed of purple clothes reminiscent of feudal Chinese garments. She wears a purple pigtail hat with a gold brim and covering half of her face is a paper talisman with three characters inscribed upon the surface. The first resembles a pumpkin, the second resembles a wrapped piece of candy, and the third is reminiscent of a bedsheet ghost. 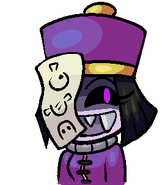 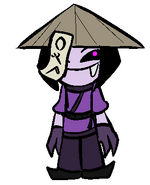 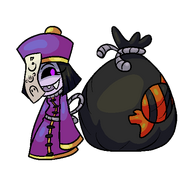