Juno is a playable character in HorrorVale, she is a ghost girl who was announced during the Creepy Chaos (Formerly "HorrorVale Halloween") Trailer released by BatWorks Software on 10/21/2019.

Takashi is named after Takashi Shimizu, the director of the Ju-On Movies.

Juno is an optional playable character. She is first met in act (?) at (Location) where Alice (Interacts) before Juno joins the team.

Juno resembles a schoolgirl in traditional eastern school attire. She has pale skin and long black hair that covers the left side of her face. She has a cat named Takashi.

Juno is an onryō, a type of ghost in Japanese mythology whose name translates to "vengeful ghost". Unlike typical ghosts (Yūrei), onryō are depicted as violent and capable of causing harm and even death to the living. Some of the most prominent ghost stories originating from Japan such as Yotsuya Kaidan, and Banchō Sarayashiki and the main antagonists of The Ring, and Ju-On/The Grudge are onryō (Oiwa, Okiku, Sadako, and Kayako respectively). 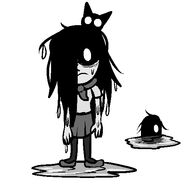 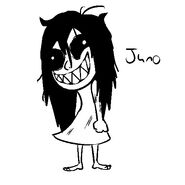 Juno's original design by Matthew Rock before her redesign.
Community content is available under CC-BY-SA unless otherwise noted.
Advertisement