Kenneth is a character in HorrorVale, he is a recruitable party member and is a bedsheet ghost with legs.

Kenneth is a name.

Unknown. Then again, what were you expecting? this is Kenneth after all.

Kenneth is an optional playable character. He is first met in act (?) at (Location) where Alice (Interacts) before Kenneth joins the team.

Kenneth is a bedsheet ghost. Unlike most of his kind, Kenneth has legs. 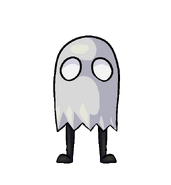 The original incorrect version of Kenneth.
Community content is available under CC-BY-SA unless otherwise noted.
Advertisement