Start a Wiki
Madeline is a character in HorrorVale. She is a young ghost possessing an iron maiden to use as a body.

Madeline is an English name, meaning High Tower or Woman from Magdala.

Though the first meaning befits the characters height, her name was chosen because of its similarities to the word 'maiden'. In reference to the fact that her body is an iron maiden.

A tall iron maiden, painted and decorated to look like a child, with dark ectoplasmic limbs emerging from her sides and bottom. She has bright yellow eyes that shine out from dark holes in her face-plate. The upper majority of her torso is painted a matte purple, and decorated with fake buttons on one side to give the appearance of a jacket. The remaining portion is a dark gray, appearing to be a skirt. The hair clip on her head is actually a hinge, allowing her face-plate to lift up. Additionally, her bottom rim is encrusted with blood.

Madeline is not present in HorrorVale Act 1. However, in the full game she will function as a method to recover the parties DP, but will not save the game like the Red Coffins present in Act 1. 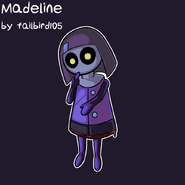 Add a photo to this gallery
Retrieved from "https://horrorvale.fandom.com/wiki/Madeline?oldid=2262"
Community content is available under CC-BY-SA unless otherwise noted.