Start a Wiki
Mask guy is a party member in HorrorVale. He is a SpookTuber out in the Withering Woods collecting footage for his SpookTube Channel, Stone Beetles.

A guy going around HorrorVale trying to record the Creepies outbreak on his camera. Mask guy has the power to evoke the abilities of various Creepies he has encountered.

Mask Guy is an optional playable character. He is first met in act 2 at (Location) where Alice (Interacts) before he joins the team.

A guy with spikey brown hair and oddly pale skin wearing a black jacket over a white shirt and blue jeans, and a white mask for some reason.

His class is referred to by Dustin Andrews as being a "Creepvoker". Mask Guy can utilize the abilities of various Creepies he has encountered throughout his time with Alice. Upon invoking, Mask Guy will use an attack associated with the Creepy and his stats will change. Each of the Creepies Mask Guy can record specializes in a particular element and stat. 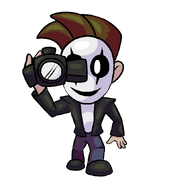 Mask Guy without his Creepies 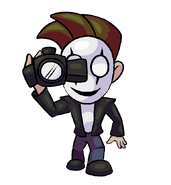 Mask Guy's original artwork with incorrect eyes.
Add a photo to this gallery
Retrieved from "https://horrorvale.fandom.com/wiki/Mask_Guy?oldid=2489"
Community content is available under CC-BY-SA unless otherwise noted.