Millie is a preppy centipede girl living in an old log. She is a recruitable party member in HorrorVale.

Millie is named after a millipede, despite her design and species being based off of centipedes.

Millie lives in an old log found somewhere outside the HorrorVale walls. She possesses a massive appetite and has been described as more than willing to devour people to satiate her hunger.

Millie is an optional playable character. She is first met in act (?) at (Location) where Alice (Interacts) before Millie joins the team.

Millie is a centipede with an orange elongated body. She has two pairs of arms and four pairs of legs. She wears a brown sleeveless turtleneck. Millie has two large dish shaped eyes that are pale, distinctive red hued blush on her cheeks, and dark brown hair tied into a messy ponytail. She has two antennae on her head, and another two on her tail.

Millie is a support character whose primary abilities revolve around her ability to heal her allies, cure them of status effects, inflict random status effects on enemies, and constrict enemies to prevent them from being able to move. 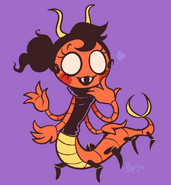 The original design submission for Millie.
Community content is available under CC-BY-SA unless otherwise noted.
Advertisement