Insanity
Plum is a character in HorrorVale. She is a recruitable party member and an unhinged goblin with quite the appetite for candy, specifically of the Netherling variety.

Plum typically refers to either the kind of fruit or the closely related shade of purple.

Plum is an optional playable character. She is first met in act (?) at (Location) where Alice (Interacts) before Plum joins the team.

Plum is a green-skinned goblin with curly purple-pink hair that covers her eyes and a set of sharp white teeth. On the left side of her visible face three dark freckles can be seen above her mouth. Her clothes consist of red overall shorts over an orange t-shirt. She wears pink-and-white striped leggings that stretch to her red bell-tipped shoes and from below her orange shirt's sleeves appear to be similar sleeves that cover her arms up to her white gloves. She wears a conical hat with three colored stripes of white, yellow, and orange from top to bottom. At the very tip of this hat is a large bell.

In combat, Plum is an offensive character whose primary ability is to achieve a sugar high that allows her to go berserk and deal tremendous damage. When it ends, she enters a crash state so effective use of Plum revolves around helping her to recover from her sugar crashes. 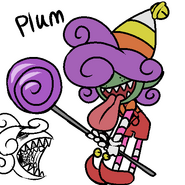 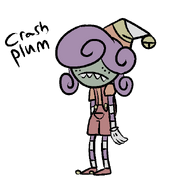 Concept art of Plum in her "crash state". 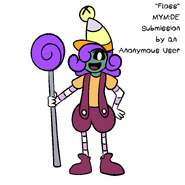 The version of Plum that was submitted to MYM. 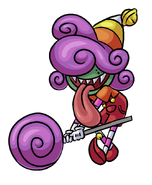