Tall Guy is a Creepy found in HorrorVale. He is one of, if not, the most powerful of the Creepies and is being sought after by Mask Guy for his SpookTube Channel.

Tall Guy takes the appearance of a tall and slender individual with a white and black striped suit, a white shirt underneath and a black bow tie on his neck. He wears matching black and white striped pants and black shoes. His skin is pure white with no facial features aside from two blank eyes. 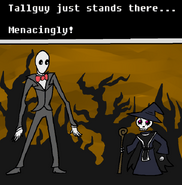 The original design for Tall Guy.